Concepts to Aid in Emergency Preparedness

Preparing for any unforeseen emergency does not have to change your life, does it? It’s easy to take a fresh brand new credit card with a $5,000 limit and get yourself a bug-out-bag, food for a year, and everything else that comes with prepping. There is no mystery or magic to it, perhaps a slight effort in an organization and becoming fit.

Prepping has become monetized, it’s an industry! You buy and buy more for any given emergency that can come your way. These concepts to aid in emergency preparedness help you stay on your target and free yourself from someone else pocket. 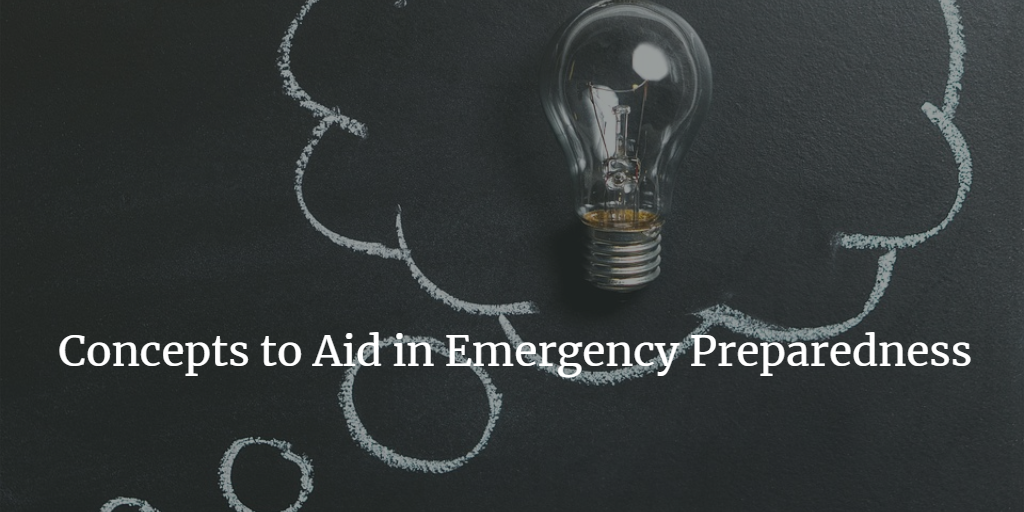 You buy in order to get over armageddon and go back to your status quo, at least you hope so, right?. Pardon my cynicism.

Based on these questions we ask you to consider a few concepts that may be an influence in your daily lives now (while you prepare), living during an emergency, or after an emergency.

This post is not meant to be encyclopedic. As a result, its meant to make you think and question, to seek answers. Entries include references in order to make it easier to start further reading. Remember you choose what you think, I just want you to, at least, think for yourself and make your own informed and responsible decisions.

Some of the concepts have led to the creation of their own posts at PSL. If you think a section is getting too big here and might need its own post, let us know. We thank the hard-working editors of Wikipedia (English) for keeping such a great resource going, we borrow many of the references from them.

Some of these are also warning signs, they were for me.

“In economics, a good is a material that satisfies human wants and provides utility.”

“…is a system of exchange by which goods or services are directly exchanged for other goods or services without using a medium of exchange, such as money. It is distinguishable from gift economies in that the reciprocal exchange is immediate and not delayed in time. It is usually bilateral, but may be multilateral (i.e., mediated through barter organizations) and usually exists parallel to monetary systems in most developed countries, though to a very limited extent. Barter usually replaces money as the method of exchange in times of monetary crisis, such as when the currency may be either unstable (e.g., hyperinflation or deflationary spiral) or simply unavailable for conducting commerce.”

“is the trust which allows one party to provide resources to another party where that second party does not reimburse the first party immediately (thereby generating a debt), but instead arranges either to repay or return those resources (or other materials of equal value) at a later date. The resources provided may be financial (e.g. granting a loan), or they may consist of goods or services (e.g. consumer credit). Credit encompasses any form of deferred payment. A Creditor, also known as a lender, extends credit to a debtor, also known as a borrower”

“An obligation owed by one party (the debtor) to a second party (the creditor) is debt. Usually, this refers to assets granted by the creditor to the debtor”

“In economics, inflation is a persistent increase in the general price level of goods and services in an economy over a period of time. When the general price level rises, each unit of currency buys fewer goods and services. Consequently, inflation reflects a reduction in the purchasing power per unit of money – a loss of real value in the medium of exchange and unit of account within the economy. A chief measure of price inflation is the inflation rate, the annualized percentage change in a general price index (normally the consumer price index) over time.”

“Scarcity is the fundamental economic problem of having seemingly unlimited human wants and needs in a world of limited resources. It states that society has insufficient productive resources to fulfill all human wants and needs. Additionally, scarcity implies that not all of society’s goals can be pursued at the same time; trade-offs are made of one good against others.”

“is a psychological phenomenon that occurs within a group of people, in which the desire for harmony or conformity in the group results in an incorrect or deviant decision-making outcome. Group members try to minimize conflict and reach a consensus decision without critical evaluation of alternative ideas or viewpoints, and by isolating themselves from outside influences.”

“refers to the notion of isolated communities perceiving themselves as superior or exceptional to the rest of the world. This term does not directly refer to a geographically confined society, but to the cultural, moral, or ideological superiority of a community lacking social exposure. Island mentality can be characterized by narrow-mindedness, ignorance, or outright hostility towards any artifact (concept, ideology, lifestyle choice, an art form, etc.) originating from outside of the geographic area inhabited by the society.”

The Spiral of Silence

“Spiral of silence theory describes the process by which one opinion becomes dominant as those who perceive their opinion to be in the minority do not ‘speak up’ because society threatens individuals with fear of isolation. The assessment of one’s social environment may not always be correct with reality.”

That’s the proper, medical, definition. I’m applying it to items and goods:

“Civic Duty or Civic engagement or civic participation has been defined as “Individual and collective actions designed to identify and address issues of public concern.” Civic engagement has many elements, but in its most basic sense it is about decision making, or governance over who, how, and by whom a community’s resources will be allocated”

”…or built-in obsolescence in industrial design is a policy of planning or designing a product with a limited useful life, so it will become obsolete, that is, unfashionable or no longer functional after a certain period of time. Planned obsolescence has potential benefits for a producer because to obtain continuing use of the product the consumer is under pressure to purchase again, whether from the same manufacturer (a replacement part or a newer model) or from a competitor who might also rely on planned obsolescence”

“Altruism or selflessness is the principle or practice of concern for the welfare of others. It is a traditional virtue in many cultures and a core aspect of various religious traditions and secular worldviews, though the concept of “others” toward whom concern should be directed can vary among cultures and religions. Altruism or selflessness is the opposite of selfishness.

Altruism can be distinguished from feelings of loyalty. Pure altruism consists of sacrificing something for someone other than the self (e.g. sacrificing time, energy or possessions) with no expectation of any compensation or benefits, either direct or indirect (e.g., receiving recognition for the act of giving).

Much debate exists as to whether “true” altruism is possible. The theory of psychological egoism suggests that no act of sharing, helping or sacrificing can be described as truly altruistic, as the actor may receive an intrinsic reward in the form of personal gratification. The validity of this argument depends on whether intrinsic rewards qualify as “benefits.” The term altruism may also refer to an ethical doctrine that claims that individuals are morally obliged to benefit others. Used in this sense, it is usually contrasted to egoism, which is defined as acting to the benefit of one’s self.”

“is placing concern with oneself or one’s own interests above the well-being of others.”

“Choice2https://en.wikipedia.org/wiki/Choice involves decision making. It can include judging the merits of multiple options and selecting one or more of them. One can make a choice between imagined options or between real options followed by the corresponding action. The arrival at a choice can include more complex motivators such as cognition, instinct, and feeling.

Freedom of choice is generally cherished, whereas a severely limited or artificially restricted choice can lead to discomfort with choosing, and possibly an unsatisfactory outcome. In contrast, a choice with excessively numerous options may lead to confusion, reduced satisfaction, a regret of the alternatives not taken, and indifference in an unstructured existence; and the illusion that choosing an object or a course, necessarily leads to the control of that object or course, can cause psychological problems.”

“Rights are legal, social, or ethical principles of freedom or entitlement; that is, rights are the fundamental normative rules about what is allowed of people or owed to people, according to some legal system, social convention, or ethical theory”

And for the two types of Rights

“Everyone is born with an equality of certain rights, regardless of their nationality. Since they come from nature or from God, natural rights cannot be justly taken away without consent”